By Allison EpsteinSeptember 21, 2017 No Comments

Charitable Spirit is Now Available in Retailers across Massachusetts 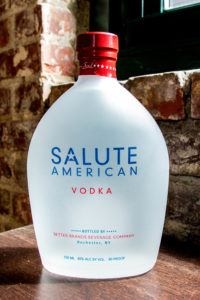 BOSTON, Mass. – Salute American Vodka, an award-winning craft vodka company, has announced a new partnership with Burke Distributing Corporation, a family-owned full-service beverage distributor based in Randolph, Mass. The partnership will introduce Salute American Vodka to the state of Massachusetts, making the charitable spirit available in restaurants and retailers across the Commonwealth.

A spirit with soul, Salute American Vodka is a leader of corporate social responsibility in the spirit industry. The first dollar of every bottle sold goes directly to organizations that assist veterans and other American heroes in their pursuit of an education, furthering their careers, starting a business, and achieving the American dream. The company’s charitable mission mirrors Burke Distributing Corporation’s long-standing commitment to supporting local communities.

“We are grateful that Salute American Vodka chose Burke Distributing to represent them as their distributor in the state of Massachusetts,” says Dave Catania, Brand Manager for Burke Distributing Corporation. “The charitable spirit not only is a well-made product, we really respect and appreciate all the work they do on behalf of our veterans.”

Like Burke Distributing Corporation, a third-generation family-owned company, which was founded in Clinton, Mass. by Walter Burke, a local grocer, Salute American Vodka is authentically American. Salute American Vodka is a USA Certified™ product, meaning everything from the ingredients to the packaging is made in the country. The company is launching nationwide – one town, one city, one state at a time. In June 2016, the brand was acquired by Handcrafted Brands of Branford, Conn. The vodka is bottled and distilled in Rochester, N.Y.

Salute American Vodka continues to score high amongst its peers, just this year earning an Ultimate Spirits Challenge Great Value award, a Silver Medal at the San Francisco World Spirits Competition, a gold medal from the LA International Spirits Competition and a Platinum SIP Medal, the second-highest consumer-chosen honor, in the 2017 Spirits International Prestige. The 80-proof vodka is distilled four times, giving it a thicker pour with a clean, smooth, and odorless taste. For more information about the brand and its impact, visit: www.saluteamerican.com.