“How can I make something broken a good thing?” This is the question Steve D’Amico asked himself when he was forced to medically retire from the military and transition to civilian life after 17 years of service in the United States Air Force and the Rhode Island Air National Guard. His solution was found in three words: grit, determination and perseverance, and inspired the founding of Broken Gear Wear, a veteran- owned, veteran-run athletic apparel company that works to empower disabled individuals to be the best versions of themselves.

In 2010, D’Amico was injured in a line of duty accident stateside. He slipped on black ice, while carrying approximately 50 to 60 lbs. of gear. He shattered his left ankle bone. The fracture spun up his leg. He underwent multiple surgeries and received 10 screws and a stainless steel plate to keep his leg in place. After two years of physical therapy, the pain did not subside and the government determined D’Amico could no longer serve in the U.S. military. He was told he was broken.

“I had no idea what I was going to do with my life,” says D’Amico. “It is very difficult for veterans who have been in the system for so many years to transition from the military to civilian workforce; because in the military you follow the chain of command, orders and regulations. Once you leave, you are thrown into an environment where people tell you to do your job, but there may be no pre-existing structure. Consequently, some veterans feel lost and may turn to negative ways to deal with their anxiety. I didn’t want that to be me.”

One year later, D’Amico attended the Entrepreneurship Bootcamp for Disabled Veterans (EBV) at the University of Connecticut. In this accelerated business development course that was held over ten 18-hour days, D’Amico created a plan to start his own business. He wanted to incorporate his story and experiences to help others. He also wanted a way to help pay it forward to other veterans.

“I didn’t know what other veterans would think of the concept of ‘broken not beaten,’ our company’s tagline,” says D’Amico. “My goal is to empower disabled people to keep pressing on. Retired and disabled veterans and other individuals in the community related to the mission – whether they were injured in the military, or in a car accident or left disabled from battling illness – they understand that we cannot give up.”

Soon after finishing the EBV program, he was connected to Work Vessels for Vets, Inc., a Connecticut nonprofit organization that equips America’s returning veterans with the tools they need to start a business or pursue career education. The nonprofit reviewed D’Amico’s business plan and awarded him $16,000 worth of equipment, including a gently used, and highly customized Dodge Durango, as well as silk screening equipment that he needed to get his business off the ground. Broken Gear Wear, based in Charlestown, R.I., was soon running.

“To have the support of an organization, like Work Vessels for Vets, to start my own business means everything,” says D’Amico. “For a program to help veterans start their own businesses, where they can control their own destiny, is incredibly valuable and humbling. It means veterans aren’t forgotten. The organization keeps in touch and continues to offer resources to help me grow my business.” 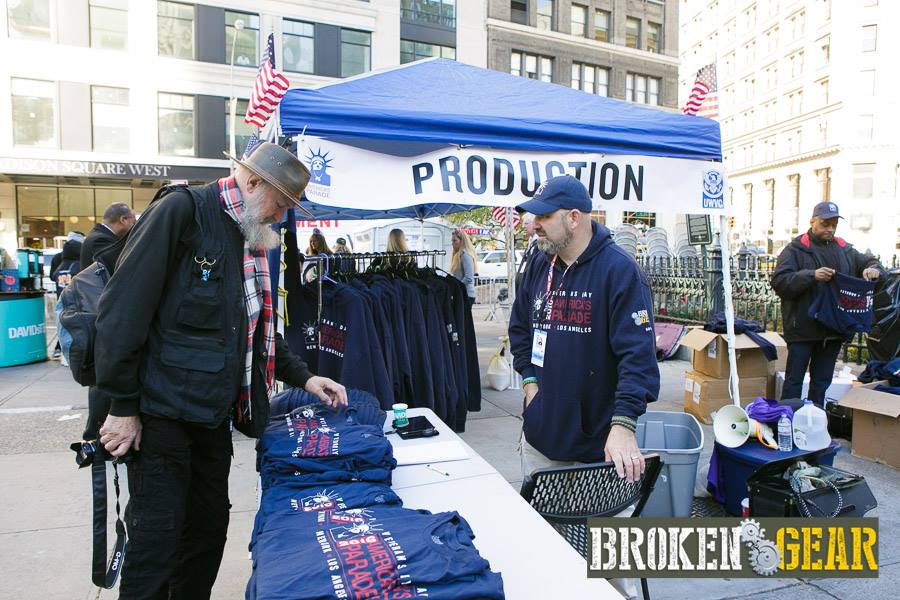 D’Amico, 44, who spent seven years of active duty and seven years of monthly drilling with the National Guard, lives in South Kingston, RI.  He enlisted right after high school as a way to be part of something big and to see the world. After coming home, D’Amico earned not one, not two, but three college degrees: a bachelor’s degree in English from Rhode Island College, a graduate degree in Education from Providence College, and an associate’s degree in Applied Science from the Community College of the Air Force. After a break in service, He re-enlisted after the 9/11 terrorist attacks and completed one tour in support of Operation Iraqi Freedom and Operation Enduring Freedom.

Today, Broken Gear Wear produces American made casual and athletic apparel, as well as advertising and promotional products. The service disabled veteran-owned company seeks to put veterans to work. The company employs as many as 15 veterans seasonally. Broken Gear Wear provides apparel for Veterans’ Day parades across the country, including New York City, Philadelphia and Los Angeles. For more information on this company, visit: www.brokengearwear.com.